Wabi-sabi (侘寂?) is a concept in traditional Japanese aesthetics constituting a world view centered on the acceptance of transience and imperfection. The aesthetic is sometimes described as one of beauty that is “imperfect, impermanent, and incomplete.

In photography, Wabi-Sabi is perhaps my favorite thing to photograph. There is so much beauty in the old, worn-out, imperfect world we live in; one just needs to look around them to see so many examples of “Wabi-Sabi”.

To select just one perfectly imperfect photo to submit for this week’s photo theme is my own personal challenge! Hmm… I know I want the photo I submit to resonate with me in being something I can relate to or that has a specific meaning at least to me. Living out in the country, this “weed” struck me as “part of my world”. But then, I’m not sure others may see this budding weed as a weed? And to this ladybug, this weed obviously attracted her (or him?) which can hardly be considered “imperfect” if it’s “what’s for dinner”!

Although I’ve taken MANY shots this week as possible submissions, I keep coming back to this dandelion seedhead. Maybe it is the way so many of the seeds have scattered in attempts to become a brand new plant? In this way, this seedhead reminds me of grown children, off on their own, starting their individual lives and families. I’ve never thought much about the current dandelion plant. After blooming their yellow flowers full of nectar for bees and then producing these seeds of white fluff, what happens to the original dandelion plant? Does it die having served its purpose of propagating new seeds to hopefully continue the cycle? Hmm? I do not know.

Still captivated by the dandelion fluffs, I shot this other seed head with my new water-proof camera (practice shots before getting it wet). This camera is “different” then the camera I normally shoot with so it was a fun adventure of learning where the buttons I normally use are located on this new camera. While this photo, itself, is not “bad”, I think I still like the previous seed head better? There is something singular about that stalk with the many seeds waiting to be blown to greener pastures. 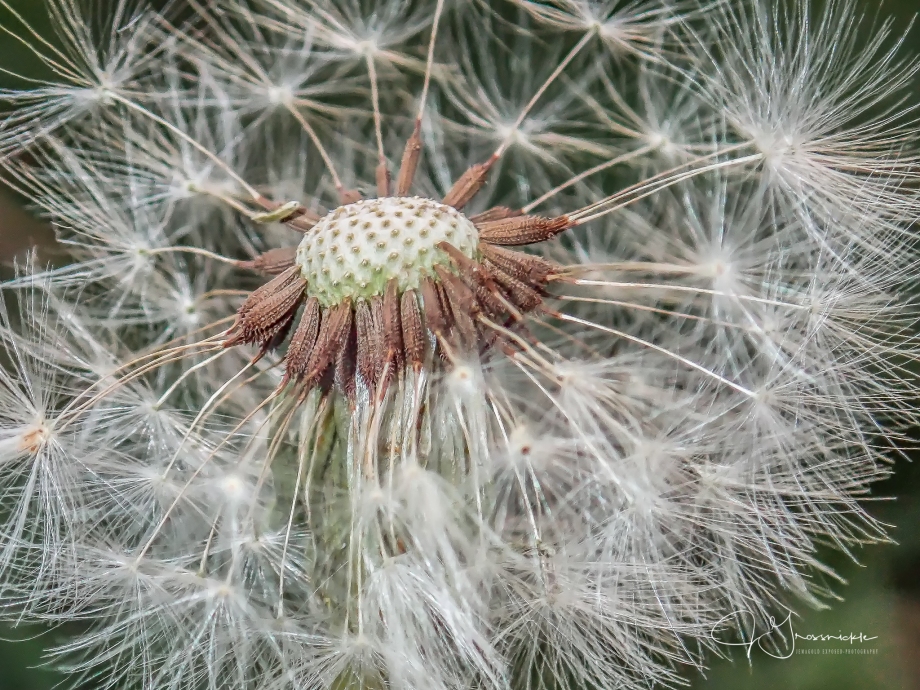 And so, with the week drawing to a close, I submitted my shot and like the tiny seeds, have moved on to other more pressing things. And while these plants are a nuisance weed in my yard, I picked one and made a wish watching the little seeds/fluff fly off into the breeze.